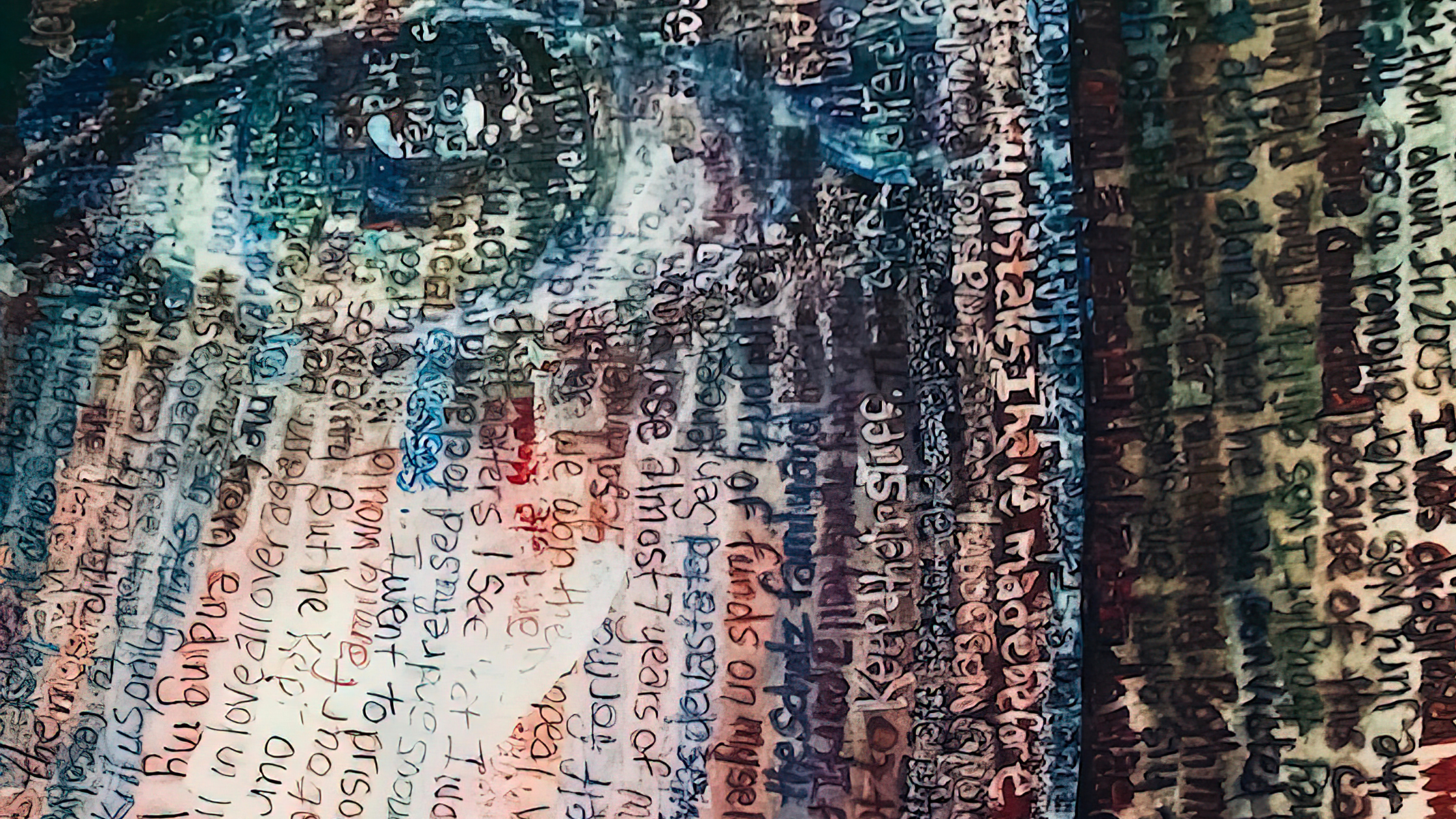 My name is Maryanne Chisholm. I am an artist. My personal story was not told in the traditional sense, it was told through art and prose. When I introduce myself, facing that idea of telling my story is immense, and overwhelming. It was painful for all involved. For me personally, it was a time of self-examination, and self- destruction. I was in prison, after being sentenced in 2005 to 27 to 32 years, for white-collar crimes I was not allowed to defend on the merits, crimes another man confessed to doing alone. I was prohibited from discussing my serious mental illness of bi-polar type II, Obsessive compulsive disorder, and PTSD. While this was happening, more and more charges were piled on. I watched the real-time destruction of my character; my family, our lives and everyone I loved. I watched people I had considered friends sell my freedom, in exchange for keeping material things. In the beginning, I remember feeling so much anger, and so much despair. I didn’t think I would ever believe in anything, or anyone, again.

In Arizona, ignorance of the charged crime is not defense of the crime. In Arizona, the CEO is culpable. In that sense, there was no defense possible. I was guilty the moment they formed their narrative. Any defenses I had were excluded, symptoms were rattled off as examples of guilt. I was guilty of stupidity, frivolity, and ignorance. It was no wonder so many people had jumped to these horrible conclusions. The result was being told there was no such thing as mental illness, I responded with introversion, silence and loneliness. There was no one to turn to. The first thing the state did was take all of our money. The second thing they did was disgorge all of our attorney fees, so we had no representation. The third thing they did was file a 20 million dollar civil lawsuit and said if we defend ourselves, it would be used against us for prosecution. In that lawsuit they accused us of crimes admitted by a man I had hired. We were forced to stand back and watch. The state only wanted the money, and they took it all, including our home. When they won a default judgment from the inability to mount a defense, they then used that judgment as an example of guilt for prosecution. My husband was not allowed in the courtroom. My entire support network were named witnesses, so they could not appear in the courtroom to support me. On the last day, I finally burst into tears, which was reported in the papers.

Through this I felt like I couldn’t even speak. So my speaking came in the form of paintings. These paintings are the story of my collection of days of emotions. My survival and forgiveness, not only of the ones who did it to our family, but also for myself. Other people were hurt because I fought back. In the end, I realized it didn’t even matter. There was no truth that anyone cared about other than my family. It simply did not matter. Later, I thought of it as karmic punishment for bad choices. I always defended my innocence in the charges themselves, but I had made so many poor decisions. The most paramount of which was not seeking treatment for my mental illness, and allowing compulsive behavior to destroy my life and others. I was sick and tired of being unhappy, I did not want to be a victim, I wanted to help others who could not speak out. I created a majority of my 5300-5600 paintings as a diary of the immense struggle for hope and faith. This was not a place for a person who was once an optimist. I had to make a conscious decision not to listen to anyone who is negative. (Pretty much everyone there was negative.)

I wrote a poem and painted, each day, often I drew in ink every tiny nuance of this pain, chaos and stress in these paintings. I did it immersed in faith, hope, gratitude, and the laws of attraction. Underneath that art, I was still a human being that was hurting, and felt that I just might not have a reason to survive after this. When my thoughts were that dark, this little voice inside me would say “No”. I forced myself to think of flying away with the victory of appeal. Forced myself to think of bright colors that existed in the real world that I couldn’t see in this gray existence. This was an expression of my soul pleading for reasons to continue to have faith. You can read more details about Maryanne’s experience on her medium here.

Are there any charities that could help others in a similar situation to yours?

The Justice project of Arizona did study my case, at the time I was selected my family had privately raised 50k for appeal. The ACLU has begun to represent wrongful conviction cases, I met with and worked with incredible people from that organization.

How did it feel to finally be free?

It was surreal, I didn’t stop shaking for days. I still have nightmares that someone made a mistake. I feel paranoid easily, I think much of that goes back to the trauma of the entire event. I don’t like wallowing, so I try to talk myself out of that when it happens. There are so many people who still need help.

How did art help you through this experience?

Art was my window to beauty. It was my escape, my mental health therapy. It did not judge, or diminish who I am. It was the only real, tangible healing that existed for those 14 years I was gone.

Where did you first hear about NFTs and at what point did it become a career for you?

In June I read about Beeple’s sale of “Everydays, the first five thousand days”. I realized I had painted every day for well over 5000 days as well. It occurred to me I could express myself on an entirely different new level with a new canvas of Nft’s. I made a decision that day that it would be my career.

What are you working on now that we should keep a lookout for?

One of my closest friends in the NFT space suggested I do some collectible pieces so that’s what I’m working on right now. I’m excited about doing a collection based on emotions, I’m in early development with the idea of doing a series based on astrology and ancient tarot.

You are one of the artists who generously took part in our Choose Love charity auction, please could you tell us about your piece? (Image below)

This is ”Metamorphosis”. I consider it my first truly great abstract piece. I’ve always loved this painting. It is about the duality of life, that the people who are creative experience every day. It’s about the warmth of confidence and the chill of doubt. It’s about finding yourself despite the layers and obstacles that we have to work through. For me it was no question it was a “Choose Love” piece.

I have seen online you are a great advocate for many different causes. For anyone who would like to get involved could you let us know about the Mental Health DAO?

I am in the very early stages of planning a mental health DAO for people in the community who suffer from mental health issues or depression. So many people are minimized or dismissed that just need validation and compassion. My idea is to build a DAO That benefits artists benefits the community of artist that participate and draws attention to artist that may not have had enough exposure. I am still looking for qualified people to help run the business aspect of the program itself, including mods devs and professional experts the community can help select . We need someone who will handle the business and financial aspect of things. I have insisted It will not be me. I want all of the focus to be on mental health, and the artists in this community. It has had an amazing response, but I am not the captain of the ship!

Thank you for taking the time to chat with us Maryanne, please take the opportunity to shout out to anyone who helped you along your journey and provide any links to help others in a similar situation.

I would not have made it through this time of my life without my husband, Mark Chisholm and my children, Adam, Josh and Paige as well as my dearest friend , Karen Bomprezzi @Bomprezziuk. I healed with the almost miraculous appearance of extraordinary souls including @BlockMuse, @ToryBryant20, @FiFiRong, @DanafDarr, @artforanarchy, @akaChambo, and Andy @Scrawlzy. Special thanks to @IndraTor for discovering my work and connecting me to the amazing gold at Known Origin. Special thanks to my extraordinary collectors including Hummingbird Labs - @rillaguy, @cryptinish, @nft_taz, @DelanoreThomas for the friendship, art patronage and free therapy. This an amazing resource for the criminalization of mental illness in the US Justice system: treatmentadvocacycenter. For more information on our Hearts and Minds program please contact me on Twitter at @MaryanneChisho2 or email [email protected]

We would like to thank MCArtist for giving up their time to collaborate on this with us.

Maryanne Chisholm is a Surreal Painter & Illustrator, and a Known Origin Community Ambassador. Sold out on multi-platforms. Exhibited at Stratosphere