The real art-world is very enclosed and this is very open, so for me it was a logical step to try it and I fell in love with it straight away.

For Birmingham born artist Gary Cartlidge, the route into the crypto-art is far from conventional. A talent and passion for art was seemingly snuffed out as a career option in early education, but Cartlidge maintained his creative desire and would later combine a day-job as an electrician with a life as a street artist, showcasing his early work to the commuters of England’s second city.

But as the daily grind of life on a building site wore away at Gary, he slowly came to a realisation at the age of 27, that digital and crypto-art may offer opportunities the more traditional art scene may have closed off.

“When I was a kid there was a distinct difference between myself and others in the classroom,” Cartlidge says looking back to his formative years in school. “You just know when you stand out in something, and abstract artwork and illustration was huge for me growing up."

This was 20 years ago and there was a very closed art scene back then, so when I left school it just seemed like an impossible task to take it any further.

My sister studied fine art and she worked in a gallery and she couldn’t find a way in and it just seemed like a daunting task and that a passion could be turned into a real horrible grind.

After quitting his job as an electrician to study graphic design at University, Gary would find himself with the skillset, passion and most importantly opportunity to demonstrate his talents to the growing crypto-art community through platforms such as KnownOrigin and SuperRare. It was the chance he needed, and one which has now developed into daily dedication to expressing his thoughts through surrealist and abstract expressionism pieces.

Cartlidge openly admits that not every aspect of crypto-art is appealing, he takes a clear mindset that he would prefer his work to age over time, rather than be held for eternity. But being able to engage with a like-minded community of digital artists is a major positive to someone who had previously felt locked out.

“It was almost perfect, it was almost meant to be,” Cartlidge says of the synergy between him leaving University and crypto-art platforms such as KnownOrigin becoming popular.

"I have always been a fan of surrealism and abstract expressionism,” Gary says of his style and influences.

A lot of my artwork is stream of consciousness and sometimes I like to leave messages in there.

I always had a problem with a consistent style, in that if you looked at say an Xcopy or Hacktao it is very consistent and distinctive.

Because I am a graphic designer I am trained to be adaptable so I can always jump between four or five different things.

Recently I have been into someone called Frenetik Void. I think the 3D generated surrealism work is gorgeous.

“KnownOrigin was so welcoming and then other groups like SuperRare and Rariable, all these sites, the people become so welcoming you get really pulled in, it is positively addictive. With the ability to create every day it is very liberating and I think a lot of the world isn’t very liberating."

It has just become a full-time gig. I have been doing it for the past two years, not really consciously considering certain paths, just getting by but the past three months have been above average wages so for me it is the same as a job.

Cartlidge continues. “With blockchain and KnownOrigin it is reaching people that I would never reach. Artists in general, especially in the modern era, are very isolated. I feel like the ability to reach people is more important than any of the other aspects that people seem to think or see right now. Most people are seeing it as a business, but for me it is an opportunity to reach people that are isolated.”

While Cartlidge may hold traditional views on how he would like to see his artwork age gracefully over time, he still embraces the prospect of seeing new technologies give his work an added dimension, such as on the latest Samsung Art TVs and in the virtual reality worlds such as Decentraland and CryptoVoxels.

A few people have DM’d me showing me images of their screens with my work on in their hallways. I have been gobsmacked because that wouldn’t have happened in a traditional artworld. That person wanted it, they bought it, but the traditional art world wouldn’t have supplied that route or opportunity.

“KnownOrigin’s space in Decentraland is stunning, the whole square with all the other galleries in that area is beautiful. I really like the idea. “It doesn’t really matter what we do, we are heading towards a digital society full-stop, it is out of our control now. It doesn’t really matter what we do, it is naturally progressing that way. It is not a negative thing, it is so liberating and it is a great opportunity and it is a great time to be an artist and a creator.”

We would like to thank Gary Cartlidge for giving up their time to collaborate on this with us. Article by @TroyFitzpatric. 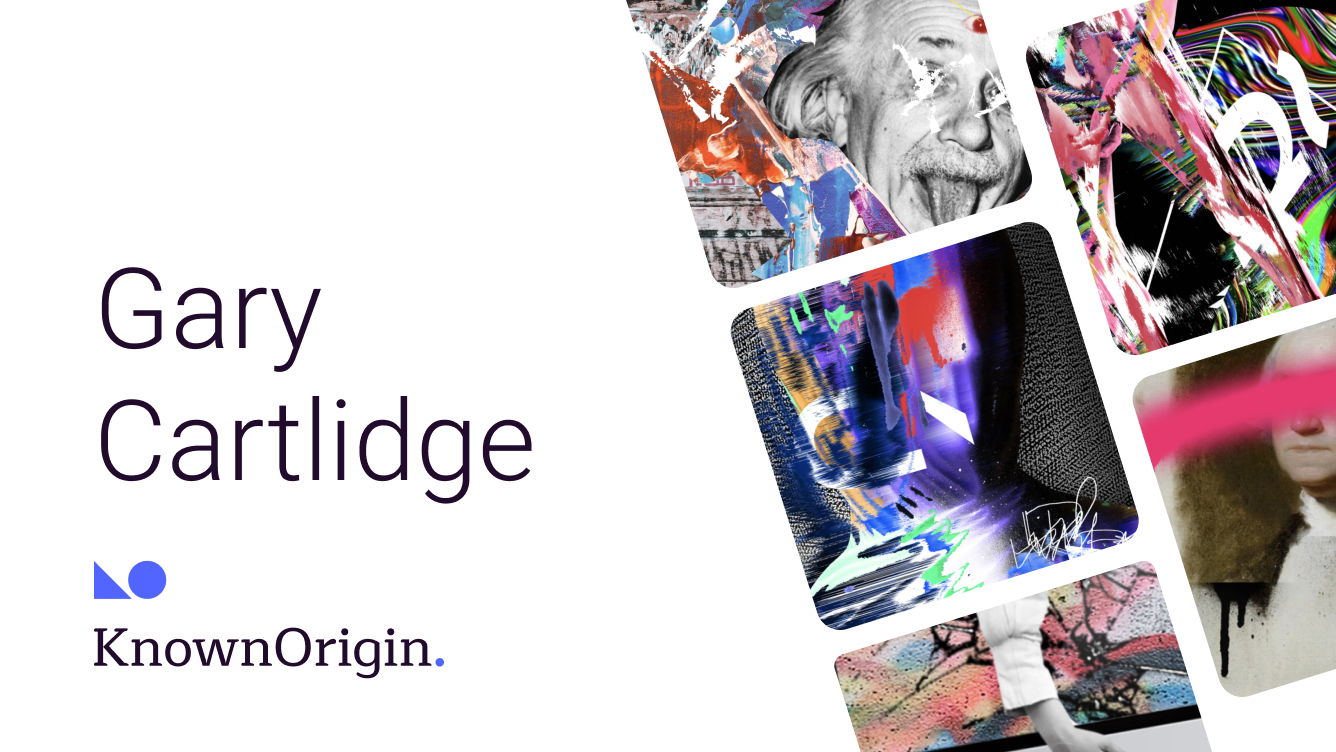