It started with a doodle in Procreate, not expecting it to go anywhere (my best stuff tends to come out when I don’t have any expectations). I liked the result, and I liked drawing weird helmets. So I made another couple 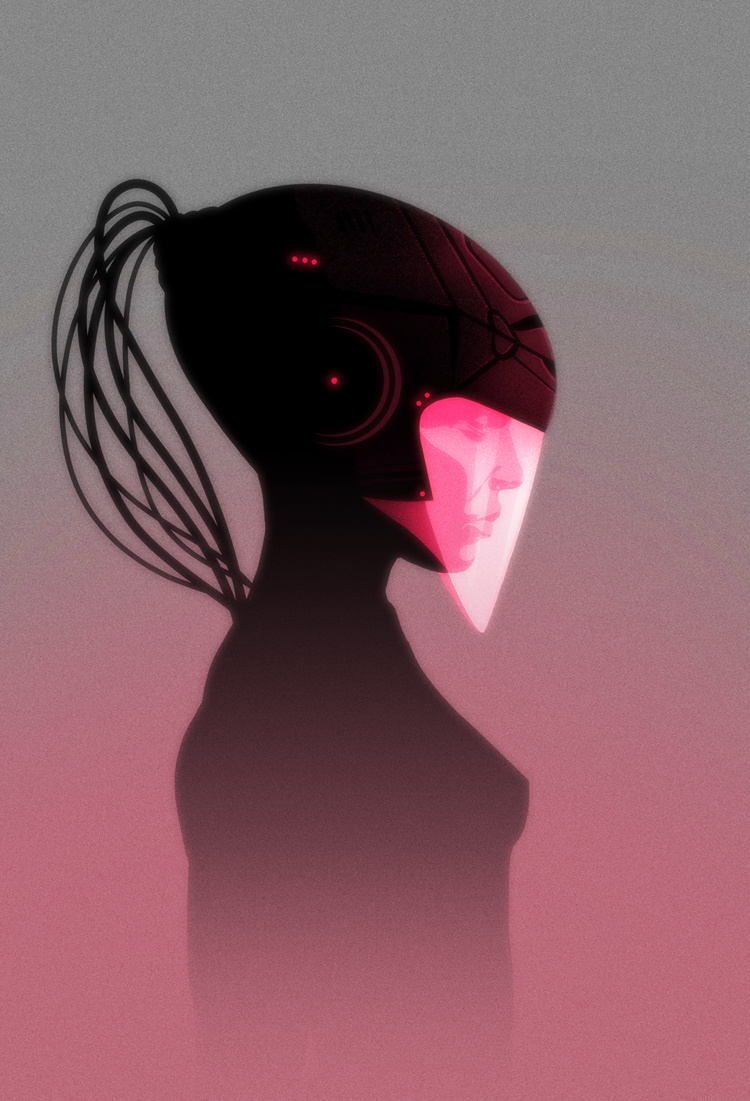 The reason I like drawing weird helmets is because I love sci-fi & future-gazing. I especially love sci-fi that’s slightly dreamy and aspirational. The kind where the mystery is centre stage. I’m also a kid of the 80s, so Star Wars (the cantina, the blast-shield) & cartoons like M.A.S.K & Ulysses 31 had a major impact.

So a combination of those influences meant I wanted to make images that were unique, cool, but also with that mysterious quality I find so appealing. That’s why the faces are mostly hidden, the background is blurred and they are standing in a lot of mist (another planet maybe).

Then NFTs came along (via KnownOrigin for me) and suddenly we were given an opportunity to find financial value in personal work. I knew instantly that HeadGear was going to be my first NFT project, because it was what I considered to be among my best work, I love making them and to me they fit the theme -future tech, VR, uniqueness etc.

Given the ability to play with rarity by using editions, I thought a perfect vehicle for them would be cards. And so, HeadGear 1 was born -nine cards, some animated with audio (I love making audio), some still, some common, some rare. I designed a template for them to sit in, which also allowed me to connect them to my Big Story Project® by showing the manufacturer as 3Moons (you’ll see that pop up in a lot of my work).

After that, I wanted to make HeadGear fully in 3D (instead of just using it as reference), have them as animated 360s so the viewer can see the helmet from all angles. I also added a vintage/VHS look to them, as a nod to those influences I mentioned. Being an 80s kid I find VHS noise etc very comforting. And cool.

I love playing in Blender & enjoyed every second of making them. I made three,with one collected so far.

Then I decided it was time for another phase and a whole new set. I returned to the roots of 2D still images. I daub shapes until I like them, then refine the shapes, add shadows / highlights, details etc. Then when it’s all put together, I tweak it all -everything from their stance to the colours to that final glow-y rendering is meant to look dreamy and aspirational. It’s a mix between future-fashion, future-gazing and hope.

In terms of the sale mechanic for HeadGear 3, I knew I wanted an auction format. It gives more people a chance to buy-in, and it’s a fair setter of value. So when KnownOrigin revealed plans to introduce 24-hour auctions I was delighted. KO is the home for HeadGear NFTs after all. But I also wanted something extra -some kind of utility or benefit to the collectors who part with their ETH for my art. And among the many brilliant features KO have introduced are -collaborations.

What this means for HeadGear 3 (& beyond) is that collectors of these pieces will have their ETH addresses added as collaborators on the next set with a 1% stake in HeadGear 4. Think of it as a MicroDAO, where investors of series 3 will profit from series 4. All going well, there will be a chance to make at least some of that ETH back, having invested in me, and allowed me the time and space to work on more.

Some people have pointed out that a couple look quite ominous, but my work tends to come out as ominous even when I don’t intend it to (dark imagination). Also pointed out to me was a heavy influence of the PS1 game Wipeout, which is clearly there (I just didn’t realise it at the time). There’s a good dollop of Chris Foss in there too, because... Chris Foss.

What I didn’t realise at the time was that this would be among my best work yet. And I do think it is. Every time we make new work, we learn, and this set has years of elbow grease behind it. And years of loving sci-fi, and, by extension, weird helmets. Also - hope for the future.

The other seas and other suns of Griff