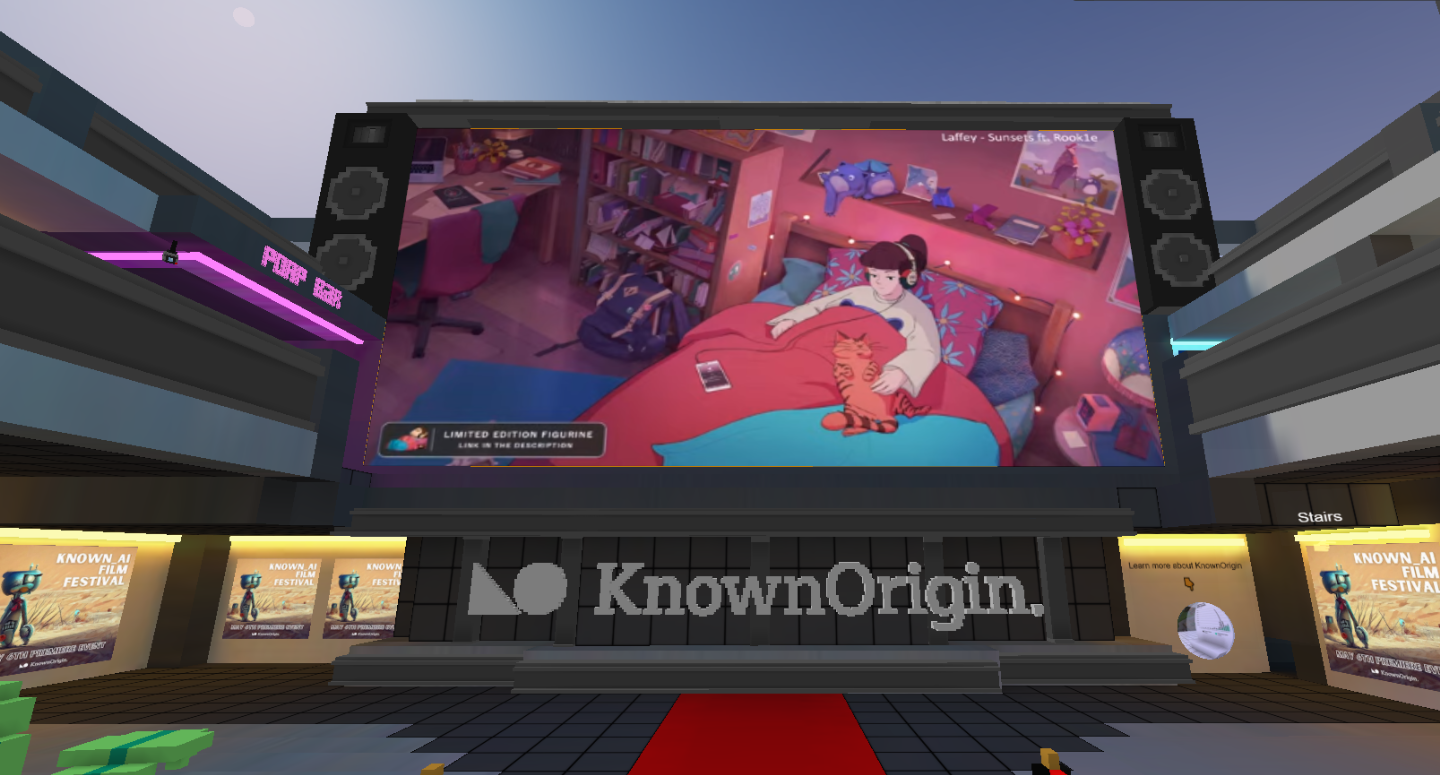 The Metaverse - KnownOrigin hosted the world’s first artificial Intelligence (“AI”) based film festival last Friday May 6th. With an unprecedented meta premiere at their CryptoVoxels gallery,they screened a slate of movies created entirely by Artificial Intelligence. The winners have been selected by the panel of expert judges, which comprises names such as Tory Bryant, Barts Weiss, and Gandamu, who awarded cinematographers in the following categories: Best Ai Movie, Best Ai Soundtrack, and Award for Technical Excellence.

The winners of the First Known AI Film Festival are as follows:

End of the Day by Chris Allen and Michael Carychao

I See You by: Irina Angles & Polya, Roope Rainisto, FAAF.

Festival Director, Kevin Page is an NFT artist, curator and founder of the AI NFT Consortium has said “The Known_Ai Film Festival is the first of its kind to exclusively feature art films that have been created by a collaboration between a human filmmaker and an Ai algorithm. In some cases, even the music, script and actor performances have been Ai-generated.”
Jake Hatt, KnownOrigin’s VR and Immersive Tech Specialist commented on the event saying “AI art is one such art form in which artists collaborate with advanced neural networks in order to create surreal and bizarre compositions. It is a very sophisticated process and I believe it reveals something about our future relationship with artificial intelligence. By bringing this event to the Metaverse I hope to inform and educate those who aren't familiar with Ai image making processes, as well as throwing a great party for the AI die hards.

Is a multi-award winning artist and innovator with two decades of experience working in a wide range of mediums from FineArts, 3D printing, film and design. Her contributions to innovation at LAIKA animation earned a science and technology academy award. Her work for Nike Concept Air Jordan 3 RTNA in collaboration with Tinker Hatfield is currently on display as part of the Naturally Brilliant Colour exhibition at Kew Gardens, London.
Tory is also a well-known NFT artists and NFT community supporter with NFTs on several platforms (including KO). She is Founder and Lead artist for Spacebots, a PFP series coming soon.

Is an award-winning independent film and video producer, director, editor and educator.
He is mostly known as the director and founder of the Dallas VideoFest. He produces the TV show “Frame of Mind” on KERA TV in Dallas, TX, and is the artistic Director of 3 Stars Cinema. He has traveled to Nigeria Pakistan and China to show American Documentaries for the US State Department.
He has taught film and video at Texas A&M's Visualization Lab, Southern Methodist University, the University of Texas at Austin, and West Virginia State College, and is currently an Associate Professor at UT Arlington.
He is a former President of the Association of Independent Video and Filmmakers (AIVF), former (and founding) board member Dallas Artists Research and Exhibition (DARE), past Vice President of the Texas Association of Film and Tape Professionals (TAFTP), founder and past President of the West Virginia Filmmakers' Guild, and co-founder of the Dallas Video Festival and the Video Association of Dallas. He has been a video columnist for The Dallas Morning News, Dallas Times Herald, and United Features Syndicate.
Bart received an MFA in Film Directing from Columbia University in 1978 and a B.A. in Radio TV and Film from Temple University in 1975.

Is known for adding 3D animation mode to Disco Diffusion, a popular Ai creation tool, and acting as a primary maintainer of that tool since that time. Gandamu posts video to his own YouTube channel, he's collaborated with Lumpy Touch to create a Garfield (or Gorefield) AI video, which uses extra symmetry effects and has contributed to numerous DJ visuals. A developer by trade, Gandamu originally learned to program for audiovisual demonstrations as part of the demo-scene. He's got a math degree and has prior experience in a variety of domains, including real-time 3D graphics development and artist tooling design for console games. He's an artist/engineer in residence with Stochastic Labs - the cross-disciplinary incubator known for Artbreeder.